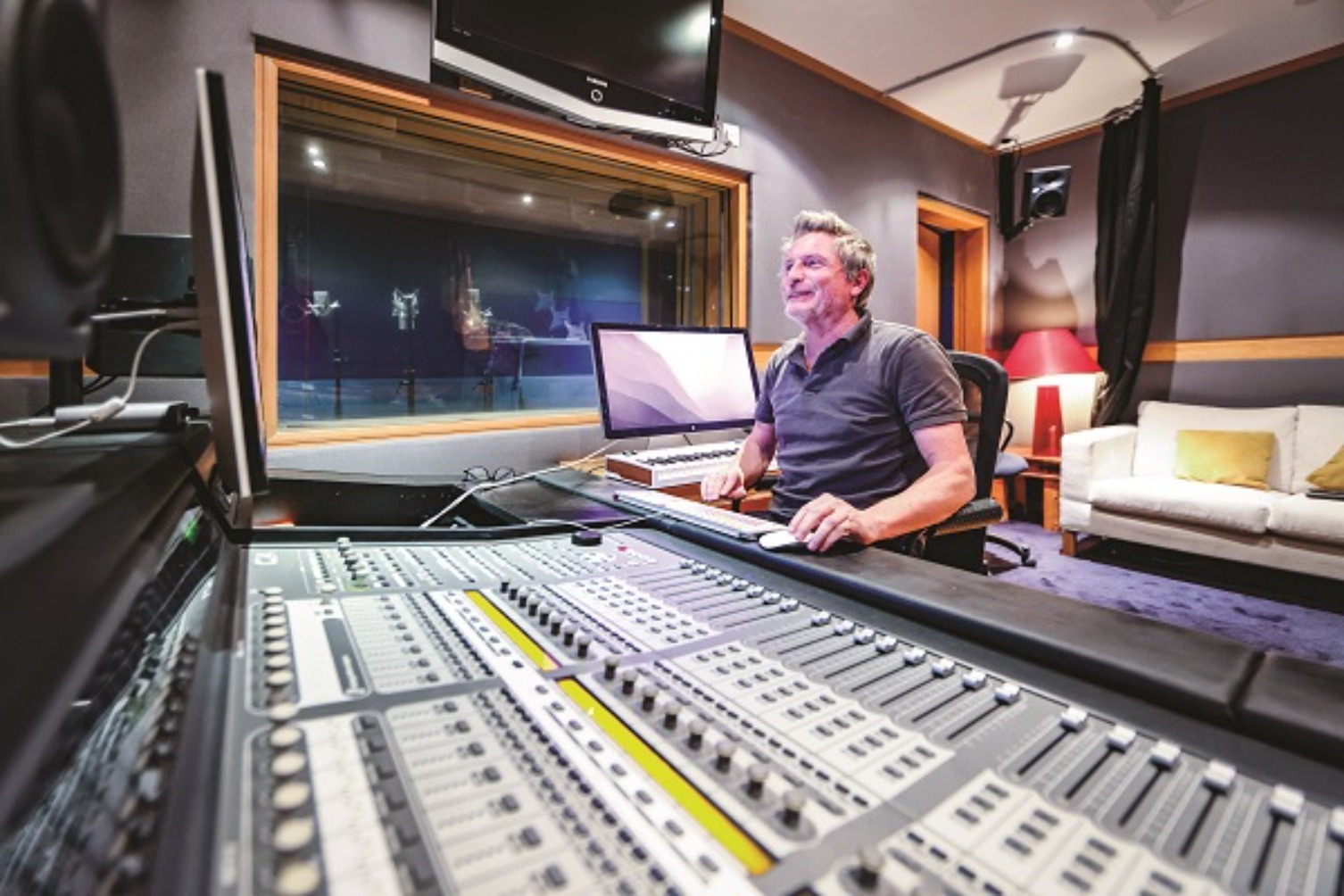 The Neumann Studio @ BKP, a collaborative project between Sennheiser Middle East and Barry Kirsch Productions, featuring a mix of new gear, promises to take audio content creation to the next level. BroadcastPro ME takes a tour.

Dubai-headquartered BKP Group, which specialises in music, vocal, video and post-production, recently partnered with Neumann/Sennheiser Middle East to upgrade one of its seven sound recording studios to a Neumann 7.1 set-up. Studio 2, which has been renamed The Neumann Studio @ BKP, is in the company’s Business Central Towers facility in Dubai. The teams worked in conjunction with UAE distributor Thomsun Trading to execute this project.

BKP decided at the beginning of this year to upgrade this studio, and the work was completed in April,” says Matt Fady, Partner/ Composer and Sound Designer at BKP Media Group. “The aim of this upgrade was to improve BKP’s audio monitoring system and widen its microphone inventory for use in all of the audio content creation that we are involved in.”

The audio monitoring system replaced a legacy system, while the microphones were an enhancement of what was already in place. Today, the studio boasts seven Neumann KH-120 full-range monitors with KH-750 subs as well as a raft of different microphones including U 87s, TLM 103s, KM 184s and a range of regionally exclusive AES-42 digital mics.

Once the music is captured, whether from an instrument or a vocalist, the availability of so many microphones at BKP means it can be transported as either an analogue signal or digital data (AES-67) to the recording software and mixing console for processing. It is then reproduced on the Neumann monitors.

“One of the more unique microphone offerings they have is an array of Neumann AES-42 microphones. These have analogue to-digital converters and some digital signal processing built into them” – Ryan Burr, Head of Technical Sales & Application Engineering | Professional Audio Systems, Sennheiser Middle East

“The Neumann KH120s that we have now are perfect for the room they are installed in and provide an accurate image, working in surround. Already, in the short space of time we have had them, they have proved their worth. In fact, we have just returned from KSA after working on a very tricky immersive audio project with a 6.1 set-up with 360-degree video projection. We pre-mixed everything in the Neumann studio in pre-production and the mixes needed virtually no tweaking on-site,” explains Fady.

This collaboration between BKP and Neumann was not typical. Neumann was also looking for a partner in the region to showcase the full range of its solutions, and BKP fit the bill.

“BKP has been responsible for some of the most iconic theme tunes, soundscapes and advertising jingles throughout the Middle East for decades,” says Ryan Burr, Head of Technical Sales & Application Engineering | Professional Audio Systems, Sennheiser Middle East. “Their credits range from telecoms provider DU’s sound logo, to the Expo 2020 theme song, to the Lincoln Navigator advert soundscape. It’s almost impossible to watch any regionally created video content without Barry [Kirsch], Matt and their team having some sort of involvement in the sound. There really wasn’t a choice to be made.”

“The aim of this upgrade was to improve BKP’s audio monitoring system and widen its microphone inventory for use in all of the audio content creation that we are involved in” – Matt Fady, Partner/Composer and Sound Designer at BKP Media Group

With the range of solutions deployed at The Neumann Studio @ BKP, the facility can be set up for 2.1, 5.1 and 7.1 monitoring configurations, depending on the content being created, though at present most mixing is done in 5.1. These are tuned using Neumann’s MA-1 alignment mic and software to ensure that any nuances in the room are smoothed out, and the studio has a flat frequency response for whichever configuration is being used.

“The microphone options here are vast, and it does depend on the type of sound source being used and the style of content being created when it comes to which to choose. One of the more unique microphone offerings they have is an array of Neumann AES-42 microphones. These have analogue-to-digital converters and some digital signal processing built into them. This not only creates the ability to hone them to a particular voice or instrument internally, but perhaps more importantly also means that the audio is converted into digital data right at the capsule, thus eliminating any acoustic noise created through the cables, connectors and other parts of the signal chain,” explains Burr.

Although the recording studio has used Neumann mics for more than 30 years, Fady says this is the first time BKP has worked with a brand at a corporate level; it saw this partnership as a new opportunity.

“Neumann is probably the most iconic brand in audio since the 1950s. If you’ve seen Peter Jackson’s documentary way back in the ‘60s, you’ll see Neumann 47 and 67 mics in most of the studio shots. Every professional studio has a range of Neumann mics, so when we were invited to collaborate with the brand, we were flattered and happy to take the opportunity. We had no hesitation.

“We’ve used the mics and top-of-the-class equipment to produce some legendary work we’re proud to share. Two or three years ago, we were commissioned by the Prime Minister’s office to arrange the official score of the UAE national anthem. At the time, there were various versions in use – a marching band, one had a saxophone in the score and others. We arranged the score of the version now in official use, and I was pleasantly surprised to find it on display at the Etihad Museum last year.”

BKP brought together 60 musicians from across the world to produce the score for the Expo theme song.

“Some had never travelled outside their home countries before. It was a fantastic experience as they mixed up ensembles, each an expert in their field but they had never played together before. We also produce Sonic branding, as Ryan mentioned. Most of the animated logos from the region, such as du and Etisalat, have been produced by us,” adds Fady.

While most of the team was familiar with the equipment, Sennheiser did offer product orientation and training on the MA-1 alignment software and process for the monitors. “The new equipment offers BKP’s current and potentially new content creators a more enhanced experience when using the studio. Some of this content is then used in the broadcast industry,” explains Burr.

Asked what’s next, Fady says the compact size of the KH120s creates the perfect scenario for an Atmos set-up – that’s on the to-do list. “This is something we would like to do in the near future.”﻿